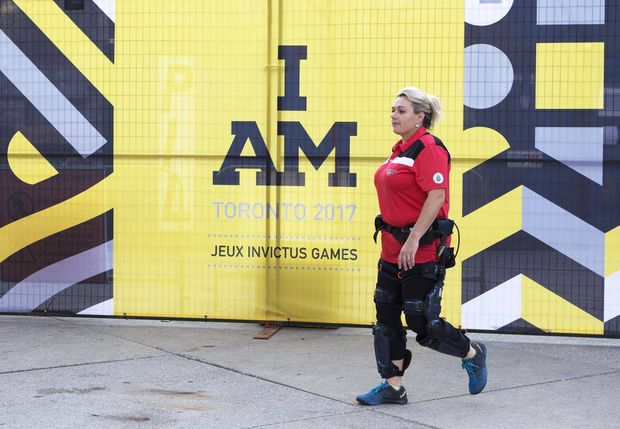 The Invictus Games in Toronto are not only focusing attention on military veterans and the life-altering injuries they have suffered, but the event is also shining a spotlight on some cutting-edge technology that allows them to compete and go forward with their everyday lives.

From bionic prosthetics to “smart” braces that return mobility to those who have lost a limb or injured their spine, there has been an explosion of innovative assistive devices aimed at improving the lives of both soldiers injured in combat or training accidents and civilians who have become disabled through trauma or disease.

Retired Master Corporal Mike (Megatraun) Trauner is among those being helped by technological advances in the rehab-devices field, in his case an “intelligent” lower-limb prosthetic that uses high-tech sensors that anticipate and help him execute his movements.

In December,2008, Trauner was part of a 200-man foot patrol in Afghanistan when he was caught in a blast from a remote-controlled improvised explosive device (IED) that blew off parts of both legs, shattered the bones in his left arm and hand and sent shrapnel rocketing into his eyes.

In an instant, his life was irrevocably altered in “every aspect you can imagine,” said the 19-year veteran, a member of the 3rd Battalion Royal Canadian Regiment, Canadian Light Infantry.

“When I got injured, everything’s taken away from you – everything from walking to standing to running to sitting,” said Trauner, 38, of Pembroke, Ont. “The list goes on and on.”

He and his wife, Leah Cuffe, had to move to a “wheelchair-friendly” home and he traded his vehicle for one that was wheelchair accessible and operated with hand controls.

But technology – in the form of prosthetics made by German-based company Ottobock – has given him back his life.

Trauner wears an Ottobock X3 prosthetic on his left-residual limb, which was amputated above the knee, that contains a microprocessor that mimics the movements of the missing joint.

“I’m walking and it thinks as I’m walking,” he explained. “It’s almost like it’s artificial intelligence. It knows what I’m doing all the time, so it makes it very safe to walk.”

For his right leg, which was amputated below the knee, he dons an Ottobock Harmony prosthetic that doesn’t incorporate a microprocessor, as he’s able to bend the knee naturally.

In all, the devices set him back more than $130,000, but their benefits are priceless.

“They give me the ability to basically be human again,” said Trauner, who competed this week at the Invictus Games, coming fifth in hand-cycling and taking double-gold in stationary rowing, both sports performed without his prosthetics.

But day to day, “I use my legs for pretty much everything you can imagine a regular person would use their legs for,” he said. “They give me the option to do what I choose to do.”

Dr. Steven Dilkas, co-chief medical officer for the Invictus Games, said much of the rehab technology now being used for the civilian population was initially developed for the military.

“I think the technical advances have certainly opened a lot of doors in terms of rehabilitation and recovery and reintegration into society,” said Dilkas, a specialist in amputee rehabilitation and sports medicine at West Park Healthcare Centre in Toronto.

“And currently, we have the ability to do computerized technology within our prosthetic devices,” he said. “So as a result of that, there are a lot more opportunities for individuals that have sustained amputations to resume physical activity, to participate in sport, and there are reports of military personnel who’ve been injured even to return to active service – which would not have been possible 20 years ago.”

About 80 per cent of amputations are related to diabetes or vascular disease, said Dilkas, with about 5 per cent to 10 per cent resulting from trauma, such as blast injuries to soldiers during combat and limb-destroying wounds to civilians involved in motor-vehicle accidents. Such occurrences as infection, cancer and congenital conditions make up the remainder.

“As technology improves and gets more reasonable in price, I think more and more people will be able to benefit from these types of devices.”

Liz Steeves, 32, is another Invictus Games participant who is benefiting from advances in the rehab-devices field, in her case a motorized “dermoskeleton” that straps on her leg and allows her to engage in everyday activities “like anybody else.”

In 2010, as a mobile-support equipment operator in the Royal Canadian Air Force, Steeves was injured – she fell almost four metres, head-first off a wall during a training exercise and crushed vertebrae in her upper spine while breaking others in her lower back.

Initially, she “cried it off,” not realizing the extent of her injuries. But, over time, her mobility grew worse, and later she was also diagnosed with a crushed kneecap.

Steeves, who lives in Sooke, B.C., was medically released from the RCAF last year because of her injuries, which had left her virtually house-bound.

But that all changed when her leg was fitted with a Keeogo, a $50,000 device made by B-TEMIA Inc. in Quebec. The Keeogo uses sensors at the knee and hip joints to detect the movement the person wants to make, then provides the assistance needed to execute the motion.

“The Keeogo allows me to have more of a life,” she said, adding that when her submariner engineering husband goes to sea, “I can go out and cut the lawn and I don’t have to worry about falling over.

“Or I can climb up my stairs, or I can go to the gym and do cross-fit and I can go out and have a ladies’ night again and I’m not home-bound,” said Steeves, who was competing this week at the Games in wheelchair tennis.

“I’ve gone from somebody who thought that they were just going to get old and grey and die … to being able to do everything that everybody else can do, from skydiving, which I did with the Keeogo not too long ago, to possibly embracing climbing a few mountains here in the future.”

Trauner, who was awarded the Medal of Military Valour for repelling the enemy and protecting his fellow soldiers during a fire fight in Kandahar in 2008, is also thinking of taking to the skies again in the future “for paratrooping stuff.”

“There’s no real limitations. If you basically dream it, you can at least attempt it. You may not be able to do it, but at least you tried.” 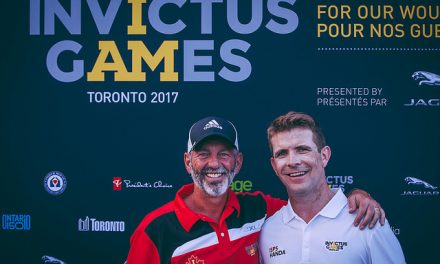 How Participating in Sports Conquered His Depression 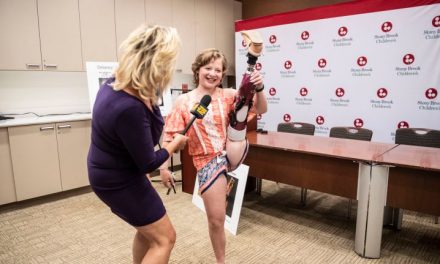 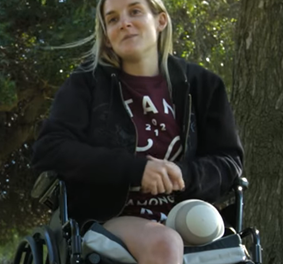